Donna Gundle-Krieg, a real estate broker from Mancelona Township, became the first Libertarian ever to win a partisan election in northern Michigan.  She beat Democrat Yousef Jabara by less than 100 votes in a three-way race for two spots for Mancelona Township Trustee. 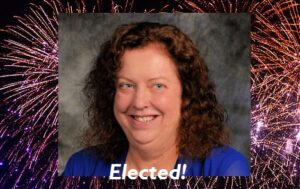 “It is always an uphill battle to compete as a third party,” stated Gundle-Krieg, who went door-to-door to explain to voters why they should consider options outside the duopoly.

Gundle-Krieg credits her victory to very hard work during the campaign. “Going door-to-door is brutal, but necessary. I thought that I knew a lot of people in town, but it was humbling that I was wrong! I loved meeting so many new friends while campaigning.”

Gundle-Krieg also believes her work as a realtor helped her in the election. She was recently voted the “Red Hot Best” Realtor in Northern Michigan by readers of MyNorth Magazine. She has sold over 300 properties in the area since moving here several years ago.

“Mancelona has been good to me, and I have fallen in love with the people in this town,” she said. “I want to continue to find new ways to give back. I really think that my leadership and communication skills will serve the township residents well.”

Donna is also very involved in the community. She is a member of St. Anthony’s Catholic Church, and the Mancelona Chamber of Commerce. Last year, she helped start the Mancelona Area Professionals Networking group, as well as Citizens Who Want a Vote on the Antrim County Jail

Donna was born and raised in the Detroit area, and has a Bachelor’s Degree in Communications from Wayne State University, as well as Master’s level business and law classes at Wayne State and Eastern Michigan University.

Donna lives with her husband Dennis on the Cedar River in Mancelona. They have two adult children. Son Steven and his wife Tori live in Chicago, and daughter Ellie and her husband Jared reside in Interlochen.

The Libertarian Party celebrated other local victories throughout the state of Michigan.