After months of deliberation, the Village of Mancelona approved a new ordinance allowing retail and “microbusinesses” for recreational marihuana. The vote was 5-0 at their September 14th meeting. Board members Mike Allison, Lori Derror, Justin MacDonald, Steve Elder and Aaron Biehl all voted in favor of revising the ordinance.

In addition, the Mancelona Township board has approved unlimited licenses for marihuana processors and Class A through C growers, retail dispensaries and outdoor growers. The most recent vote was 4-1, with Chuck Johnson, Jessie Ayoub, Rod Vesey and Donna Gundle-Krieg voting in favor of the revisions to the marihuana ordinance, and Mike Biehl voting against the revisions. 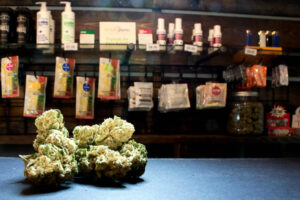 Both the village and township marihuana ordinances will bring many changes to Mancelona in the next few months. Many of these changes are contingent upon the Village awarding licenses for the following buildings:

1. The PNC Building at the corner of M-88 and US-131 has been purchased by Green Pharm, who plans a regional headquarters for over a dozen stores. Green Pharm’s plans in Mancelona include a retail dispensary, offices, training facilities, and housing.

2. The recently closed downtown hardware store is another probable site for a retail dispensary or microbusiness.

3. The former video store next to Family Fare may also become a retail cannabis dispensary.

Changes to the Township
On the township side, the factory at 9855 Front Street has been purchased by a cannabis company. This company has received licenses from the township for a retail dispensary, as well as a Class C grow facility. The factory is big enough to add more Class C licenses in the future, as well as a processing license. A Class C license allows up to 2000 plants.

Several other Mancelona Township citizens are working on licenses for processing, indoor and outdoor growing.

Other Businesses Coming to Town
In addition to the new marihuana businesses, the updated marihuana ordinances will bring other businesses to Mancelona as well.

There is a new clothing store moving into the corner store where Honey Hollow Treasures was located. There are also plans for a bar and grill with outdoor seating where the Mancelona Tavern used to be.

There is also a possibility of Mancelona Water and Sewer Authority receiving state funds to extend the sewer north from the village. This would potentially bring in more business and housing, including a chain hotel and bar/grill.

Housing remains a big challenge in the area. Jason Green of Anchor Management owns several of the downtown Mancelona buildings and has already renovated the old apartments on the upper floors of many of these buildings. The village now allows first floor housing, as long as the building has a “business front.” Some of the potential new cannabis companies are also researching ways to increase area housing for their potential employees.