Four Antrim County Commissioner positions will be contested in the August primary election, and there is also a challenger for the Sheriff’s job.

Being challenged in this election are Commissioners Ed Boettcher, Brenda Ricksgers, and Jason Helwig. Dave Heeres is not running, but has two people battling for his position. Sheriff Dan Bean is also being challenged.

Boettcher, Ricksgers, and Heeres all voted “yes” a few months ago on moving forward with the issue of building a new jail and other facilities. The proposals for the new facilities ranged from $40.2 to $75.9 million. The Commissioners were split, 5-4, on whether to move forward with building these facilities.

There is a good chance that this expensive idea for new facilities will fade away once the new Board of Commissioners is in place. Many taxpayers, who deserve a vote on this topic, will suffer economic devastation due to the pandemic. In fact, there are predictions that many government workers could lose their jobs due to lost tax revenue. Hopefully, members of the new Board of Commissioners will realize that now is not the time to spend many millions of dollars.

Several current Commissioners and challengers have filled out questionnaires from the group “Citizens Who Want a Vote on the Antrim County Jail.” The newer candidates will be sent this questionnaire, and all answers will be published in summary form in the next few weeks.

The deadline for Democrats and Republicans to file was Tuesday, April 21. Those who want to run as independent or third parties should contact their respective party or contact Sheryl Guy, County Clerk, at guys@antrimcounty.org or 231-533-6353.

The following Democrats and Republicans have filed as of the deadline, according to Guy. These people will be on the August 4th primary ballot: 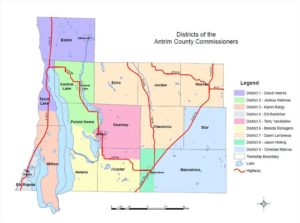 District #9 Star and most of Mancelona Township:
Christian Marcus, Republican incumbent, has filed.