Racin’ Jason Crum is running as a Libertarian candidate for Michigan State Representative for the 104th district, which includes Grand Traverse County.

Jason, former deejay at WKLT, is the father of six children and resides with his wife Shawn in Kingsley. 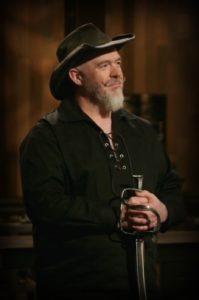 He is currently a blacksmith at HJ Forge, a shop that specializes in forging Damascus Knives. One of his claims to fame is winning the “Forged in  Fire” contest on the History Channel.

Jason has already done a series of videos about his candidacy and why he wants to run for State Representative. Basically, he feels that the people in the 104th district deserve “common sense representation,” especially regarding recent actions by our governor.

Jason will be on the November 3rd ballot, running against Democrat Dan O’Neil and winner of the Republican primary, either Heather Cerone or John Roth.